Ramaraju Mahanthi
Thank You For Everything.

Subhash .. was born in the year 1947 ... at Shakkar Nagar .. BODHAN .. of Nizamabad dist. (Andhra Pradesh) .. to Patri Venkata Ramana Rao and Savitri Devi. His earlier schooling was in the town of Bodhan and city of Secunderabad. College studies were completed in the city of Hyderabad. After obtaining post-graduate degree in Soil Science in  the year 1974, from The Andhra Pradesh Agricultural University, he took up an assignment in a multinational fertilizer company in the year 1975.

Subhash Patri married Swarnamala Siriguri in the year 1974. He is the father of two daughters ..  Parinitha  and Parimala .. born in the years 1978 and 1982 respectively. Both of them are great meditators and experienced wonderful things in their meditation. Parinitha got married on 31st December 1999 to Srinivas Reddy who is a very great Spiritual Master . He has deep spiritual insights into life, and has tremendous wisdom-knowledge. Second Daughter Parimala Patri got married to Mihir Sanghvi on 19th December 2010.

Subhash Patri became enlightened in the year 1979 .. after some serious experiments with meditation. Since then, Patriji began striving hard to awaken and enlighten each and every individual. Further, in the following decade, he completed reading more than 50,000 books on science of spirituality and science of meditation.

Patriji established " The Kurnool Spiritual Society " during the year 1990 .. in Kurnool .. with the sole mission of creating intense awareness amongst all individuals .. about the science of meditation .. and its primary role in providing physical, mental and intellectual health and well-being to all.

SOUL - SCIENCE LITERATURE
Patriji has authored over sixty books and several audio and video cassettes and CDs .. mostly in Telugu language .. on various New Age spiritual science topics to-date. Under his authorship, vast amount of spiritual science literature in various languages .. by way of magazines, books, audios and videos .. has been created. Under his guidance, books authored by great spiritual masters of the rest of the world have also been translated into Telugu, Kannada, Hindi, Tamil etc.

BRAHMARSHI
In the year 1997, in the temple town of Tirupati, Andhra Pradesh, all the pyramid masters gathered and conferred the title of ' Brahmarshi ' on Patriji. Brahmarshi Patriji travels extensively to every nook and corner of the country .. including remote villages .. throughout the year .. and conducts meditational classes to individuals of all ages, education and strata. Till date, Patriji has conducted thousands of workshops on Anapanasati Meditation .. Vegetarianism .. Pyramid Energy .. and New Age Spiritual Science etc.

MUSIC AND MEDITATION
Patriji is also a great flutist and singer, and has devised techniques combining music with meditation for very intense meditational experiences. 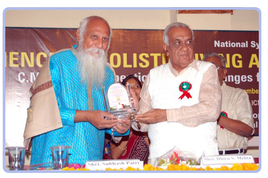 Patriji has been honored by a Life-Time Achievement Award at the National Symposium on Science of Holistic Living and its Global Application, organized by AROGYADHAM at Mahatma Gandhi Institute of Medical Sciences, Sevagram, WARDHA, during the month of November 2006.

Patriji has been honored by a Dhyan Visharad Award by Indian Board of Alternative Medicines, Kolkata at 21st International Conference held in Kolkata during the month of March 2013.

Patriji's dream is to create ' pyramid jagat ' by the year 2016. It is time now for the whole world to embrace the science of meditation .. that is Anapanasati  The whole pyramid spiritual societies movement is geared to achieve that, Patriji teaches that vegetarianism and anapanasati meditation are fundamental to world health and world well-being.